Hartley Wintney Junior Football Club has a hard-earned reputation as a well-respected and organised football club. We welcome players of all abilities; across our age groups we have a range of teams that cater for the needs of the individual player engendering a spirit of learning through having fun. The club continues to grow; we currently have 28 teams providing football for over 300 players.

Most of our teams play in the North East Hants Youth League (NEHYL) which remains one of the best leagues in the area in terms of the way it is run and the breadth of ability – we have representation in every age group from U7 up to Youth (U17/18).  And we have had three teams playing in the Junior Premier League (JPL). Our introduction to football starts at U6, who ‘train only’ and the emphasis is on fun and playing games with and without balls.

We now have several girls’ teams in the Hampshire Girls Youth League, having only started in the last few seasons, and we are an accredited Wildcats Centre with the objective to increase the number of girls’ teams each season.
​
FA England Football Accredited Club

Hartley Wintney Junior FC is an England Football Accredited club (previously known as FA Charter Standard Community). All that we do as a club is built around the key tenets of maintaining EFA status. Recent initiatives include the formation of a Wildcats centre promoting girls football, and a Junior Football Committee, giving our players a voice to help shape and run their Football Club.

Ethos of the club

​Hartley Wintney Junior Football Club is a community club run by volunteers. We strive to be a friendly, all-inclusive, mixed ability junior football club for boys and girls. We aim to promote grass roots football from u6 to U18, creating an environment that is fun and safe for all involved. For as long as we have space, pitches and willing and qualified volunteers to run our teams, we will do all we can to accommodate as many children as possible.

Hartley Wintney Junior Football Club was founded in 1996. Known as the Hawks, the club started with just 2 teams who played friendly matches on pitches that were marked out by cones. From our early roots we have grown somewhat and are now affiliated to the Hampshire FA. We play fixtures in the North East Hants and East Berkshire Leagues as well as entering teams into the annual Hampshire Cup competitions.

Weekend fixtures are played in the heart of our village on the playing fields at Greenfields Junior School, Hartley Wintney FC, neighbouring Jubilee playing field, and most recently the new sports ground at the Lucy Pygott Centre at the far end of St Mary’s Park for which we are very grateful to the Parish Council for providing.
​
Training is run by accredited coaches and most teams are at Robert May's School, Odiham floodlit artificial pitch. We also organise a Soccer School during holiday times to build on a mixture of training, football skills and active healthy fun.

The club is run by dedicated volunteers, who are all Level 1, Emergency Aid and Safeguarding qualified, and who have completed an enhanced Criminal Records Check. We abide by the FA Codes of Conduct, FA Policies and implement the Respect Programme. We strive to achieve respect both on and off the pitch from our opponents; we achieved the NEHYL Fair Play award - awarded for good discipline and sportsmanship – in two consecutive years, and seek to repeat this feat. 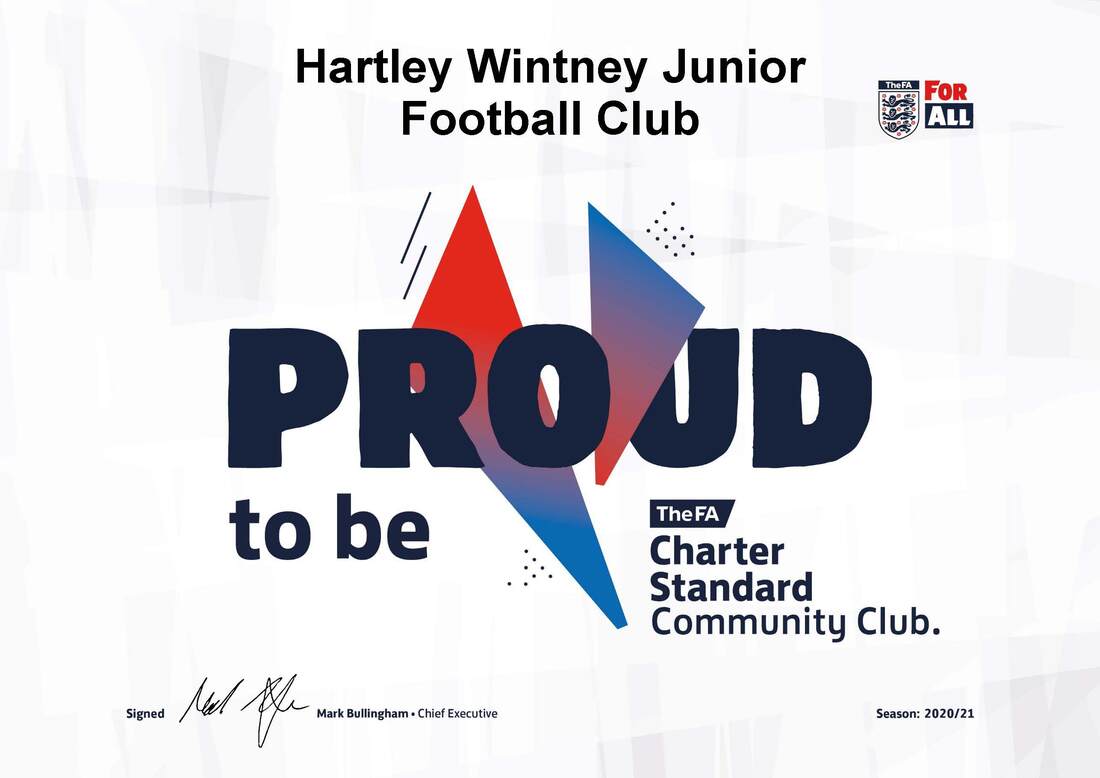